Fancy a great night out for a fantastic cause?
NICK HARPER with support from Siobhan Parr & Dave Sutherland 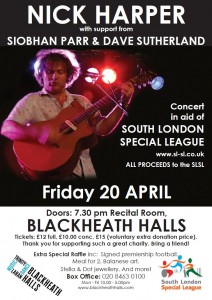 Son of the legendary UK singer-songwriter Roy Harper, Nick has played the guitar from the age of 10 and was surrounded by the likes of Keith Moon, Jimmy Page, Robert Plant and Dave Gilmour as he grew up, so it was no surprise when Nick made his recording debut on his father’s ‘Whatever Happened to Jugula?’ in 1985. Nick’s talent and energy entranced Roy’s fans and it was inevitable that he would begin recording and touring in his own right.

In 1996 Nick met Squeeze frontman and songwriter Glenn Tilbrook. Tilbrook was so impressed that he offered Nick a job playing with and supporting Squeeze and promptly signed Nick to his own label, Quixotic Records. Following tours in the UK, USA and Japan, Nick recorded the 1998 album Smithereens with Tilbrook as producer. This album and subsequent 40 date solo tour, including dates in New York and Glastonbury, confirmed Nick as a formidable talent in his own right. “If imagination, energy and bags of talent were the only factors in making a successful pop career, few would deny that Squeeze man Glenn Tilbrook has backed a winner in Nick Harper…Splendid stuff” – MOJO magazine. He teamed up with Tilbrook again on 2000’s highly acclaimed album Harperspace. This is the album that confirmed his position at the forefront of a new generation of British Acoustic Performers. “Nick Harper has a quality that stands head and shoulders above anything else you are likely to encounter…The Verse Time Forgot from the new album ‘Harperspace’ is as close to a perfect song as you are likely to get.” Edinburgh Evening News

To call Nick a superlative singer/songwriter could put his highly lauded guitar talent in the shade, and to call him a guitarist’s guitarist might slight his distinctive, soulful voice and passionate songs. Not forgetting the wild ride that is one of his live shows – from personal introspection to biting political satire via a charmingly caustic wit. He often segues from his own compositions to well-loved covers he makes his own – he takes on Presley, Zappa, Jeff Buckley, Led Zeppelin, Monty Python and Public Enemy (yes, on an acoustic guitar).

For over 15 years, he has been dazzling audiences and reviewers alike with his heady mix of virtuosity, boyish charm, showmanship and sheer bravado. His talent and showmanship were recognised in with a (Glasgow) Herald Fringe Angel award for excellence in live music during his Edinburgh Festival run.

“Harper has so much musicianship in him that it just leaks out all over the place.” The Times
“Frank Zappa would have been impressed” Robin Denselow, The Guardian

2 Responses to "A chance to see Nick Harper in Blackheath"