Glenn just toured the US, and is now finishing up a major UK tour. If you went to any of those shows, you probably know that he climbed Mount Kilimanjaro for the Love Hope Strength Foundation! He had an incredibly difficult time, which he’s been candid about onstage and off.

I asked Glenn in Portland, just days after the climb, why it had been so much more difficult than the Mount Everest trek he undertook for the same charity in 2007. He told me the main factors were that the altitude sickness had hit him much harder, and also he hadn’t trained this time.

Doing a little googling on my own I found sites like “Training Tips For Climbing Mount Kilimanjaro“, where potential climbers are informed:

Altitude sickness affects people randomly, and a person might not suffer from it on one climb and then get hit hard the next time on that same route.

This is exactly what Glenn said, and didn’t know before he went; it’s totally unpredictable, but he hadn’t worried because he’d been fine on Everest. The web site goes on to say:

Of course, increasing your general level of fitness will go far to avoid compounding possible altitude sickness with general fatigue.

Poor Glenn! But in the end the whole team did make it to the top, raising crucial funds and awareness for a local cancer hospital. Glenn talks about the gruelling climb in this recent interview on Absolute Radio (11 MB mp3 download). It’s a really good interview that I highly recommend!

He also discusses a topic of much interest on the Glenn List: his new short hair! He explains that he had pictured a sort of George Clooney look, but he feels he came out more on the side of Bobby from King of the Hill!

Well, I like the new do, and I think the Bobby reference is way out of line. But this particular Bobby moment does put me in mind of this video from FluffersTV!

David has advised me that short posts are the way to go with a blog. Well, clearly I’m no good at that, so I will leave you with a lovely image of Glenn and some Maasai people hanging out once he had gotten off that cursed mountain. Good to see a smile on his face! 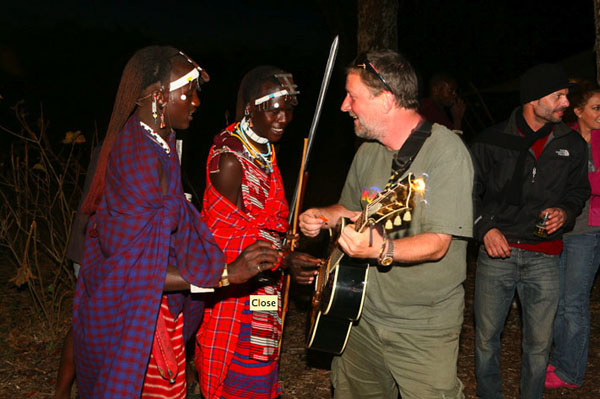 One Response to "Glenn Versus the Volcano"