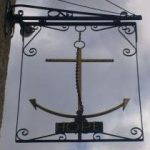 Glenn and the Fluffers have been playing a series of impromptu gigs in a pub in South East London. The gigs have been electric! The next is 19 January, the venue is the Anchor and Hope, 2 Riverside Walk, Charlton, London, SE7 7SS. Phone 020 8858 0382. Be there early.

Let’s have your reviews then!