As David mentioned a while back, Glenn and the Fluffers have been playing a series of  informal, creative, and lively gigs at The Anchor and Hope in London (SE7) on Tuesdays.

The band seem to be having a fantastic time, and so do the audience! There have been tons of people writing into the Glenn List about these very popular shows. They like to mix things up, for example last Tuesday Glenn announced it would be an “electronic evening”, and Mark from the Glenn list was there.

What a bizarre, brilliant, bonkers evening. Glenn had promised an electronic evening this week and joked about Kraftwerk but I thought he just meant not acoustic. However, true to his word, the only guitar in sight was Lucy’s bass. Even Simon was playing keyboard drums.
The set was a mixed bag, some old, some new, some borrowed and some blues. Rehearsals appeared to be minimal, but the show was a riot of laughs, fluffed lines, robotic moves (Simon & Lucy), surprised looks when a song didn’t work, more surprised looks when they did. Incredible, terrible, fantastic, sometimes in the same song.
Oh, did I mention the make up? They all wore eye liner.

Thanks to the miracle of modern YouTube, you can watch some of these songs for yourself! Val posted Another Nail, fully electronic (eyeliner sadly not visible in the low lighting), Funkytown, and Don’t You Want Me, to which Glenn doesn’t appear to know many of the lyrics, but he gets lots of help!

That’s nothing. The week before Glenn was ill and couldn’t show up at all, so The Fluffers played with whoever wanted to guest vocal! Many of the volunteers were really very fine singers, especially the pub landlord, who knocked my socks off with Stand By Me. So did Stephen Large with his great melodica solo! The song is swiftly followed on the same video clip by Valerie, which is also excellent.

That last one was uploaded by snipturn, who has posted tons of great live YouTube videos of Glenn (solo, with the Fluffers, and with Squeeze) in his channel! I particularly love this clip of Glenn singing The Waiting Game at a solo show in Nottingham on December 12. An especially fun video is from the previous December, when Glenn and the Flufffers played Tempted to a fan from the audience, who ended up joining them on tambourine and backing vocals. Everyone’s dancing, joking around, and having a great time, and the audio and video quality are both very good. 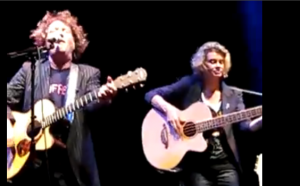 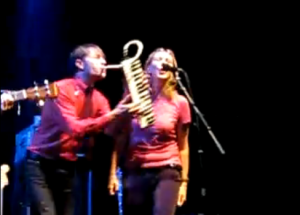 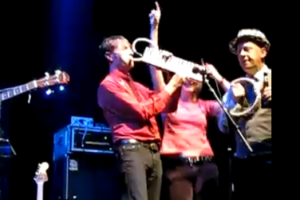 The Anchor and Hope shows will be continuing through February and admission is free, so get down there if you can! They’re packed; advice from the Glenn list is “Be early, or be tall!”

4 Responses to "Glenn and the Fluffers at the Anchor & Hope – Still!"