Squeeze and Fluffers news flooding in:

Squeeze are advertised as appearing at the V Festival :

A great interview and photo in the Daily Mail: 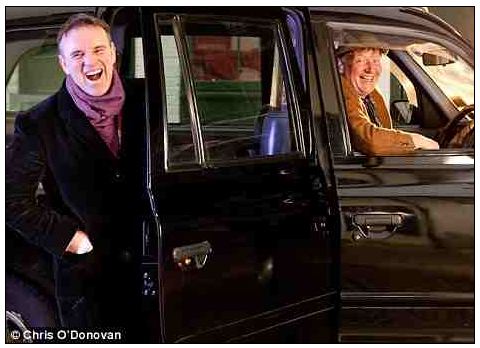 Squeeze?’ says our cabbie, Alan from Uxbridge, with a quizzical look. ‘Didn’t they break up?’
Well yes, Alan, they did. In 1999 and in 2007. But now Squeeze are back again, and, if any long-running partnership is like a marriage, the one between the band’s lead singer-songwriters, Chris Difford and Glenn Tilbrook – now clambering into the back of the cab with their guitars, wandering minstrel-style – is of the Elizabeth Taylor-Richard Burton variety.
‘How many times did they get back together?’ asks Glenn. ‘Two or three? Well, we’re up there with them, aren’t we?’
‘There have been times when Glenn and I haven’t communicated, as in any marriage,’ says Chris. ‘We’re very different personalities, which is not only what’s made it work in the past, but also why we’ve needed time apart.’ He casts a look in Glenn’s direction. ‘But I’ve known him longer than anyone apart from my brother. We first met in 1973; it’s quite something, really.’
‘It was almost like we were the best Squeeze covers band ever’
Both men are now in their 50s, and indeed cut disparate figures – Glenn avuncular and full of bonhomie, Chris more cautious and ruminative (this is his 18th year sober; his self-confessed hard-living past has included spells in rehab). But both are thrilled with the renewed recognition and respect that Squeeze are enjoying. We’ve picked them up from a BBC interview and are dropping them at the O2 in Greenwich, Southeast London, at the end of a sold-out British tour.
Meanwhile, the likes of Lily Allen and Mark Ronson have been extolling the virtues of the band’s peerless back catalogue, from ‘Cool for Cats’ to ‘Up the Junction’ to ‘Labelled with Love’. (‘They’re one of my favourite bands of all time,’ enthuses Lily, while Johnny Depp once came up to Glenn to tell him he was his favourite guitarist.) The ostensible reason for this latest reunion centres on that catalogue; it turns out that, owing to early publishing deals, they don’t hold the rights to their own songs. When Glenn heard yet another Squeeze song fronting a tacky TV ad, he decided enough was enough, and enlisted Chris to re-record all the band’s biggest hits – the resulting album, Spot the Difference, came out last year.
‘It’s our way of reasserting ownership over these songs,’ says Glenn. ‘And that led on to us performing again, which has been amazing. It was almost like we were the best Squeeze covers band ever. But the experience was so good that we felt we could move forward and write some new material together for the first time in years.’ He looks out at the tower blocks of the City rushing by. ‘We spent a lot of time in the past chasing our tails. Everything’s great when you’re having hits, but when that stops everyone thinks they can fix the problem, and you end up going round in circles.’ He shrugs. ‘Now, we’re doing it on our own terms, I really feel that the best could be yet to come.’

Glenn and Chris back in the day
Some feel that, for a band that contained ‘the new Lennon and McCartney’ (as Chris and Glenn were once described in Rolling Stone) and who have an Ivor Novello award to prove it, Squeeze have been classic underachievers; they’ve been supported at one time or another by U2, Dire Straits and the Jam. Even their erstwhile keyboard player Jools Holland has carved out a higher profile for himself. ‘There was a time when I wondered why it hadn’t happened for us,’ says Glenn. ‘But there were so many reasons, really, not unconnected with our personalities.’
For Glenn, there was an overriding love of hearth and home – he lives in Charlton, Southeast London, barely a mile from where he was born, and has three sons from two marriages. Chris has always had a pathological fear of flying, which compromised the band’s ability to tour, and which even Paul McKenna struggled to efface. ‘He took me up in a light aircraft, and he actually looked more scared than I did,’ grins Chris. ‘But then, when one of my brothers died, my then girlfriend took me on a flight to New York. It was his passing that gave me the strength to face it; I felt that I had to do it for him.’
Chris has now moved back to London from Brighton, and talks of his pride in his children (his daughter works with Squeeze’s backstage crew; his son is in a band of his own). As we approach the O2, the pair discuss the next chapter in the Squeeze story with palpable excitement.
‘We’re still young,’ grins Chris. ‘I really feel that.’
‘We have more energy now than we’ve ever had,’ adds Glenn. ‘I feel like we’re really focused. I can’t wait to bring all the knowledge we’ve acquired, and the enthusiasm we still share, to a new Squeeze adventure.’

Acoustic Magazine has a great 3 page interview and cover and inside photos – well recommended reading. 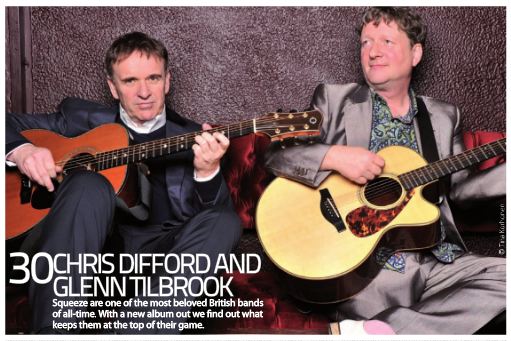 7 Responses to "Gigs and Mags"