I’m still working on transferring the ultimate Squeeze discography from the old www.packetofthree.co.uk site (still there as an archive if you fancy a visit down web nostalgia lane…). Whilst I do that, here’s a new addition to the collection – as if the novelty of producing a 5″ vinyl single wasn’t enough (for younger readers, singles were usually 7 inches wide – what do you mean what is an inch?!) but producing it in RED VINYL as well? That’s just overkill. 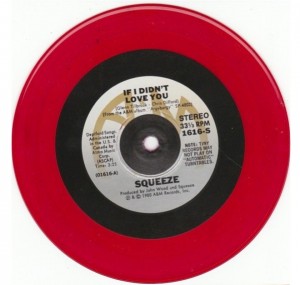 Here’s what the eBay ad said:

Here’s a very rare Squeeze collectible -a RED VINYL prototype of their 6″ A&M Single IF I DIDN’T LOVE YOU/ANOTHER NAIL IN MY HEART. This was issued as a limited edition black vinyl single, but never released on red vinyl. Recordmecca’s Jeff Gold is a former Vice President of A&M Records and obtained this from a former co-worker, who had it in his collection since it was made in 1980. To our knowledge, the two red vinyl copies found in this collection are the only copies ever discovered on red vinyl.

I love the idea of record company employees making rare coloured vinyl copies of singles just for their own amusement (and personal gain once of pensionable age). The record is actually only 5″ and not 6″. No comment.

RECORDMECCA’S Jeff Gold was named by Rolling Stone magazine as one of the 5 “Top Collectors of high-end music memorabilia” Gold is a frequent consultant to the Rock & Roll Hall of Fame in Cleveland and the Experience Music Project in Seattle, was a featured appraiser on the VH1 television show “ROCK COLLECTORS,” and was profiled in the book “Vinyl Junkies” by Brett Milano. 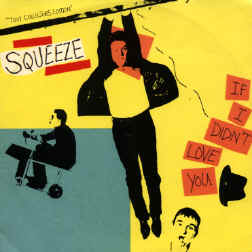 A nice item – what else is out there to discover? Let me know…