(Sub-headline: “Searching for Squeeze’s roots, Garry Bushell ends up in a pub as usual- but not in dreary Deptford as planned”)
by Garry Bushell

“She used to do a topless / Down at the Surrey Docks / With tassels on her wotsits / She did a t’riffic job / Of raising all the eye-brows / Of every lunch time mob” – SQUEEZE, “It’s Not Cricket”
“Jesus always loved us / Scattered us in stardust / I have waited a whole lifetime for you / Singing Hare Krishna” – SKYCO

“Allo, wanna drink?” Chris Difford, Squeeze’s ace word-wriggler, sits on the high bar stall by the antique phone in the Rose And Crown (aka Lousy Brown) at the bottom of Crooms Hill, Greenwich, two minutes away from his attic flat and a one note hackney carriage ride from the towering concrete jumble I call home and the council so lovingly christened The Ferrier.
“Cheers. Pinta lager.”

“Yeah well,” Chris grins, “I wrote ‘Cool For Cats’ in here,” he says patting the notebook he carries round with him.

We shake hands and I introduce him to my wife who’s come along as a fan.
“You must by mad,” he grins and before long is picking our brians about the cost and convenience of church couplings.
24-year-old Chris, it transpires, is tying the noose, sorry, knot, himself soon to an American lady and is planning two weddings this Spetember (unbridled masochism), one in the States and one in Greenwich, hopefully with a reception in the Albany. “With a couple of decent bands, a free drink every ‘alf hour, a stripper… You oughta come.”
I tell him I was coming over to the States to see Squeeze t’other day, but blew it out for Sham’s farewell fling (and I called him a masochist!). We marvel at my stupidity and sit in a corner under some handsome-looking muskets with water turtles swimming round behind us in a flash fish tank and Max Wall’s luvly mug looking over us (well, we are next door to Greenwich Theatre, dear).
“Anyway I thought Squeeze’d make more sense in your local,” I say, noting that the place ain’t exactly the Gor Blimey and pass the whelks emporium I’d imagined.
“Yeah well,” Chris grins, “I wrote ‘Cool For Cats’ in here,” he says patting the notebook he carries round with him.
“Yeah? You’re looking ‘slightly rough’ now as it happens.”
Chris is tired and flops back with his budding beer belly bulging nicely. “Yeah, I just flew back from the States yester-day morning. I’d been away from the flat virtually three-and-a-half months and I got back to find fleas everywhere. ‘Ad to ‘ave it disinfected. So I’ve bin decorating all day,” he laughs, “I should have sued.”
Over here for a while now are you?”

I was heavily into religion at the time,” Glenn confesses with a twinkle in his eye. “I shaved me head straight after that photo was taken.”

“Yeah. They wanted us to go straight back and do the States again but we told ’em to stick it up their arse. The band feel strongly that we haven’t really covered England enough as a head-line band and there’s a lot of places, including Scotland, where we really wanna spend some time. So we got a 50 plus British tour starting on October 8.”
And they won’t be playing Hammersmith Odeon – no non-dancing venues, thank God.
Slattery bundles in noisily so I get a round in before Squeeze tunesmith Glenn Tilbrook arrives with his entourage who sit to one side gathering other friends. Without wishing to be rude you can’t help noticing they ain’t exactly Lorraine Chase/ Jim Davidson sounda-likes, if you follow my drift.
Perhaps this was one of the Squeeze ironies that needed to be brought up later… But first things first, and now I’d got the both of ’em – howsabout those hippy-length barnets and ultra-silly Skyco lyrics (quoted start of article) as recently exposed in a rival music paper famous for its threatened circulation and the amazing number of pseuds and self-seekers in its employ.
“Oh dear. That.” Chris grins. “I saw that in Canada on the Saturday and me first thought was to ring and say ‘How much to keep it out’ then I thought sod it, it don’t matter.”
Was you really into Hare Krishna? 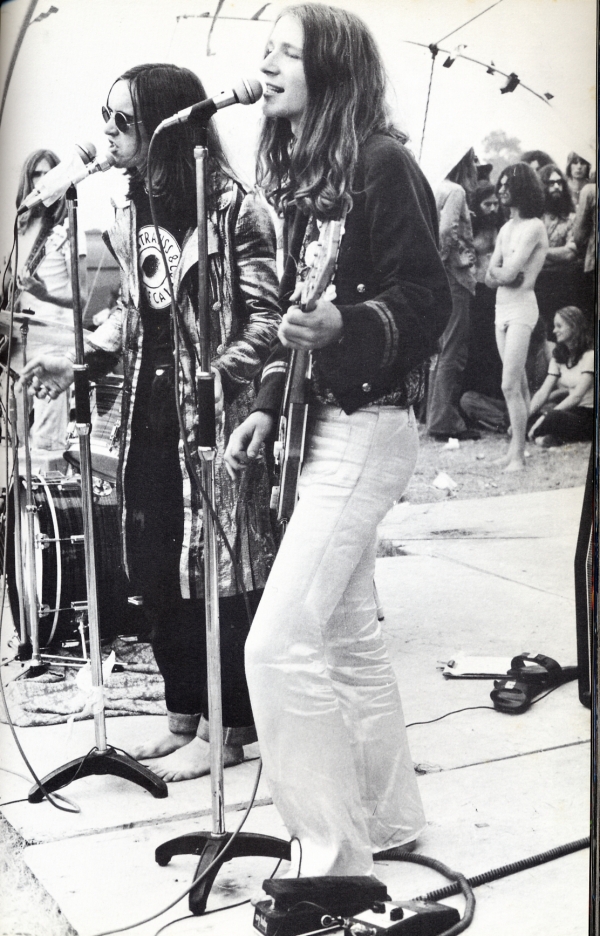 One Response to "Squeeze Archive Interview #3"