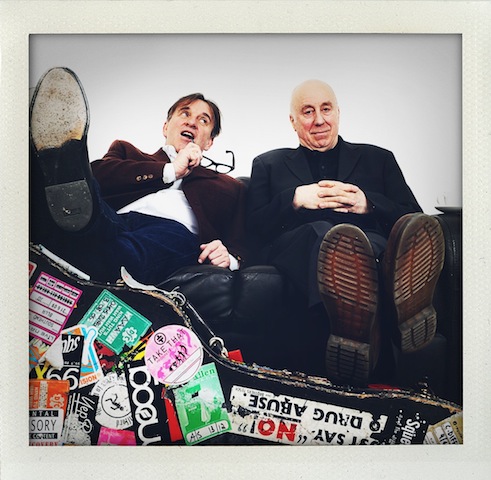 Joining Chris on stage will be Norman Lovett, best known for the role of the ship’s computer Holly in Red Dwarf, bringing his own inimitable, dead-pan style of stand-up comedy. This evening of outstanding music and comedy will consist of new and old songs, from the early Squeeze hits to the present day – leading each chapter of his life with songs from throughout Chris’ career, banter and even a few short films in a unique evening of songs and laughter.

Double Ivor Novello Award-winning lyricist and enigma Chris Difford has brought us characters and sketches from every day life, turning the mundane into the beautiful, the urbane into the exquisite, for over 30 years.
With his partner, collaborator, friend and Squeeze co-founder Glenn Tilbrook, Chris has written some of the most enduring and best-loved songs of our time. Up The Junction, Cool For Cats and Labelled With Love, to name but a few.
Chris has 16 Squeeze albums, 3 critically acclaimed solo albums, countless top 20 hits, 32 American tours, 30 UK tours and a variety of global tours under his belt.
He is one of the country’s most respected songwriters and has co-written with a host of musicians and performers that reads like a veritable who’s who of the industry – Elton John, Trilok Gurtu, Marti Pellow, Lamont Dozier, Willie Mitchell, Bryan Ferry Jools Holland and many others, as well as collaborating with songwriting partner Glenn Tilbrook to write the successful 1984 musical, Labelled with Love. One of his most recent co-writes appears on the best selling Ollie Murs album, proving Difford’s classic yet contemporary touch.
Difford is well known within the industry for his twice-yearly songwriting retreats, which do exactly what they say on the tin! He recently curated two fascinating Songs In The Key Of London concerts which saw a host of thirty or more performers including Suggs, Phil Daniels, Glenn Tilbrook, Elvis Costello, Jools Holland and Gary Kemp gather together at the Barbican and this year in Greenwich Park to perform songs by Londoners about London. He also hosted a serious of school visit inner-city writers workshop across 4 weeks as part of an Arts Council initiative. 2012 will see more of the same.
For 2012, Chris has a solo tour ‘aided and abetted’ by comedian Norman Lovett for an evening of music and humour. With Norman providing laughs in his own inimitable style, Chris tells the story of his musical life – covering everything from the 50p advert in a newsagent window that was the start of Squeeze, through to playing Madison Square Garden and beyond.
A show not to be missed.

Is he playing anywhere near you?