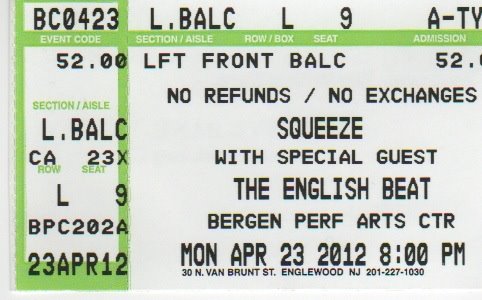 Thanks to Thomas Boynes for the ticket

SQUEEZE SETLIST:
Take Me I’m Yours
If I Didn’t Love You
Tough Love
In Quintessence
Revue / Model
The Knack
Who’s That
Is That Love
Points Of View
Heaven
Melody Motel
Bang Bang
Cool for Cats
Up the Junction
Another Nail in My Heart
Goodbye Girl
Annie Get Your Gun
Hourglass
Pulling Mussels (From the Shell)