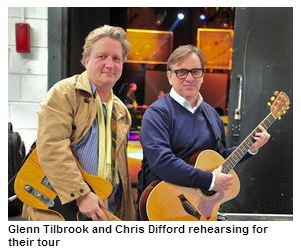 THEY’VE been together now for (nearly) 40 years, and, after spending time with Glenn Tilbrook and Chris Difford, it’s obvious that it really doesn’t seem a day too much for either of them.
The Squeeze singer-songwriters met after Glenn answered Chris’s advert in the window of a Blackheath sweet shop for a songwriting partner back in 1973.

They have been working together, with a few breaks, ever since.

Today they’re with the rest of the band rehearsing in Borehamwood for their Pop Up Shop tour which started on Friday, and are clearly content in each other’s company.

So much so that they’ve written the first new Squeeze songs in 14 years, which fans can buy at the gig along with a CD of the very show they’ve just seen.

“We’re really excited to get on the road again,” explains Glenn.

We’re really excited to get on the road again explains Glenn. “I feel really proud of what we’re doing, and it’s a completely revitalised band now.”

He adds, though: “There was a stage last year where we’d just come off touring our Spot The Difference album of reworked hits and I think, if we’d carried on like that, we’d have got to a point where we couldn’t have carried on any more and still done it justice.”

Squeeze recently featured in the BBC Four documentary Take Me I’m Yours, recounting the story of the band, particularly its changing members (Glenn and Chris are the only remaining originals) and the relationship between Tilbrook and Difford, which saw them estranged for periods as they dealt with problems over relationships, communication breakdowns, and Chris’s past problems with alcohol and cocaine.

Their legion of loyal fans wondered if they’d ever play together after 1998’s last Squeeze album, Domino.

The pair didn’t speak for nine years, and both pursued solo careers.

It was the death of Chris’s brother (“The biggest Squeeze fan”, remembered Chris) which brought the duo back in touch, and their closeness is now palpable.

“The documentary was good, but in an hour you can only tell so much of the story of Squeeze,” explains Glenn, “and its lovely to go back to the beginning of our career and have 30 or 40 years of writing to choose from. “The tour will tell our story from the early days. Doing it now feels like we’ve brought things full circle.”

Chris is one of pop’s most inventive and sensitive lyricists, and a song he wrote about Glenn’s life illustrates how that circle has been completed.

“We do a song in the show from the Domino album called Without You Here, and Chris wrote this lyric for me about how I’d split with my ex and she’d taken our two sons to live with her in Australia. It was a very painful, horrible time, but now we’re at the opposite end of that time, where those kids are now grown men.

“One of them is here and one of them is down in Australia, playing in a band. The relationship between Chris and I, though it has changed greatly, has not been damaged and it’s lovely to be able to play that song from the other side of the experience. Him writing something like that for me is very personal and very touching.”

Difford may have written the lyrics for such jaunty Squeeze hits as Another Nail In My Heart and Pulling Mussels From A Shell but he can write about how men feel in a way that only a few songwriters such as Jimmy Webb, who wrote many of Glen Campbell’s hits, can really succeed with.

Does he ever think he has given too much of himself away in his songs?

“Yes!” he says instantly. “On my first solo album the producer, Frances Dunnery, wanted me to reveal a lot of myself and I thought that was really moving.

“On the second album I tried to do the same thing but I went overboard. I was really happy with it but I gave it to my kids a couple of weeks later and they said they hated it, and that it said too much about my relationships.

Looking back, I think they were right.” The early Squeeze lyrics weren’t quite so heavy on the sensitivity, though, as Chris remembers.

Her says: “Our earlier career was quite macho and out of place really, and very juvenile; particularly on the Cool For Cats album (including the song of the same name, as well as Slap And Tickle).

“Lyrically it drew a lot of people in, especially men, as we were absorbing a grown-up world for the first time and it was mostly blokes and pubs.

“I remember a review in one of the music papers talking about the sexism and machismo in the lyrics, and it wasn’t until we got to East Side Story that I started to branch out. They were the first lyrics that took me to a different place.

“As I grew older, women’s influences in my life made me take a different turn and I felt different. It doesn’t feel like a masculine world any more.’

For two men who have written songs that have become beloved by many, Glenn and Chris seem almost diffident about the way the nation has clutched them to its collective bosom.

“I’ve always seen myself as an outsider,” muses Glenn.

“I don’t move very much in music business circles. I’m very insular in my own part of the world in south east London and I like it like that.

“I think its a combination of me being quite shy and happy with my own lot. You don’t get over shyness by being in a band. I love being on stage but I don’t consider myself to be an outgoing person, which is why I probably don’t like people commenting on my beard or my trousers,” he says, referring to the rather magnificent face furniture which he sported in the BBC Four documentary, which he’s now got rid of (to some sighs of relief…).

Apart from the music, Difford and Tilbrook clearly get a lot of their jollies these days from their families and it’s especially lovely to hear Chris talk about his youngest daughters, Grace and Cissy.

“They’ve started going back to listening to stuff from the James Taylor and Joni Mitchell era. They’ve been round the block with everything else. My youngest, who is 16, is a big fan of Leonard Cohen because of the poetry, which I find very exciting.

“But when she goes out, she dances to Tamla Motown like everybody else. I saw her dancing for the first time a couple of weeks ago. It was so thrilling, a wonderful feeling,” he says with a proud smile.

With warmth like that, the future of Difford’s wonderful lyrics and Tilbrook’s gorgeous melodies guarantees another golden era for Squeeze. Squeeze tour until December 16.

2 Responses to "Older and Wiser but Still Cool For Cats"