Squeeze: ‘competing with your own past is hard’ 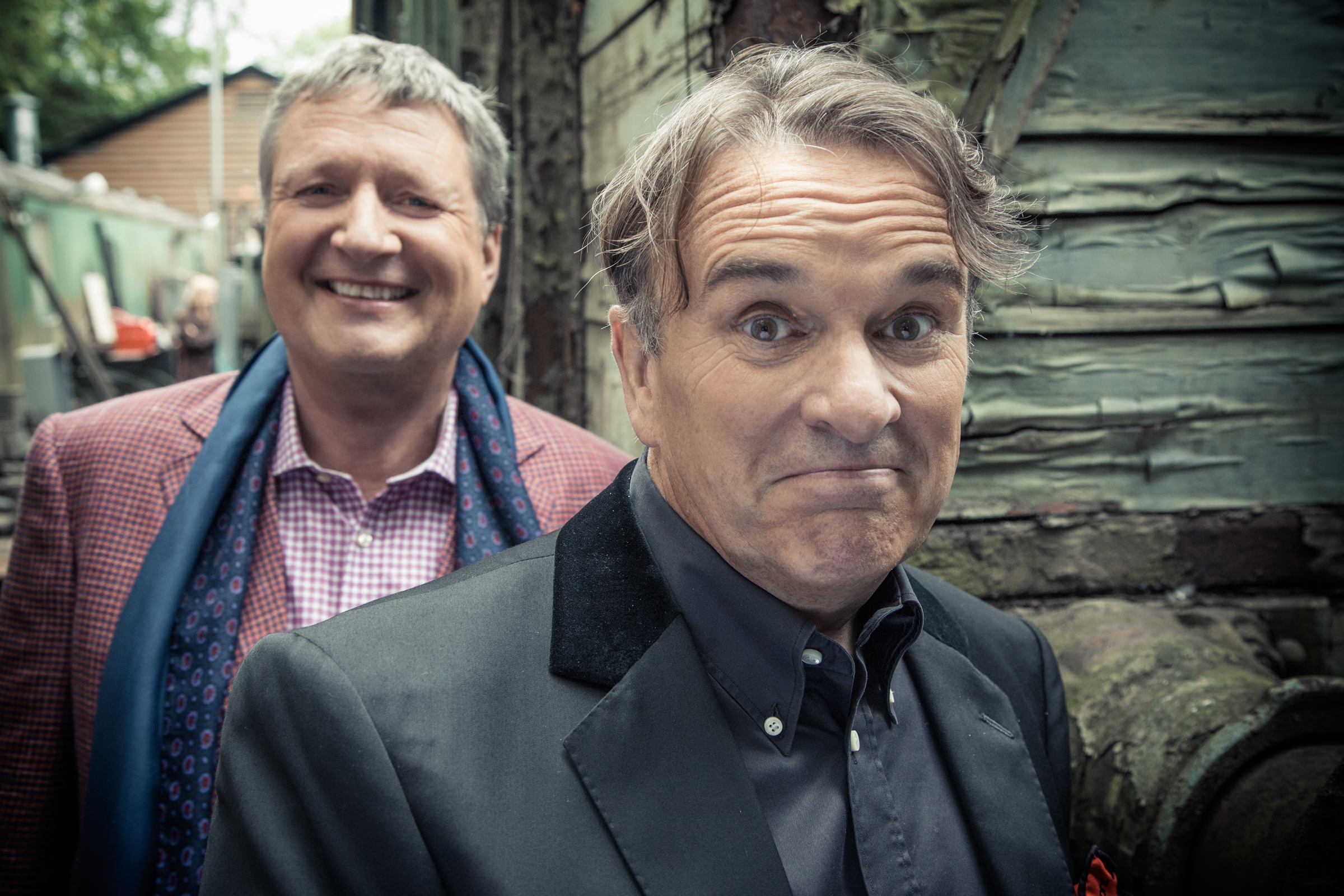 28 SEPTEMBER 2015 • 7:00AM
Squeeze are back with their first album of new material in 17 years. For fans of classic British pop, this is very good news indeed. But word evidently hasn’t filtered through to everyone. Deep in an industrial estate in Charlton, south London, a mechanic wipes his hands on greasy overalls and sniffs. “Squeeze, is it? So that’s who makes all the racket.”

Hefty spanner in hand, the mechanic points between warehouses, past stacks of wooden pallets and piles of bricks, to where the band’s HQ stands surrounded by crash barriers and a rusting forklift. “Tell ’em they can turn it up a bit,” he laughs. “Good tunes.” 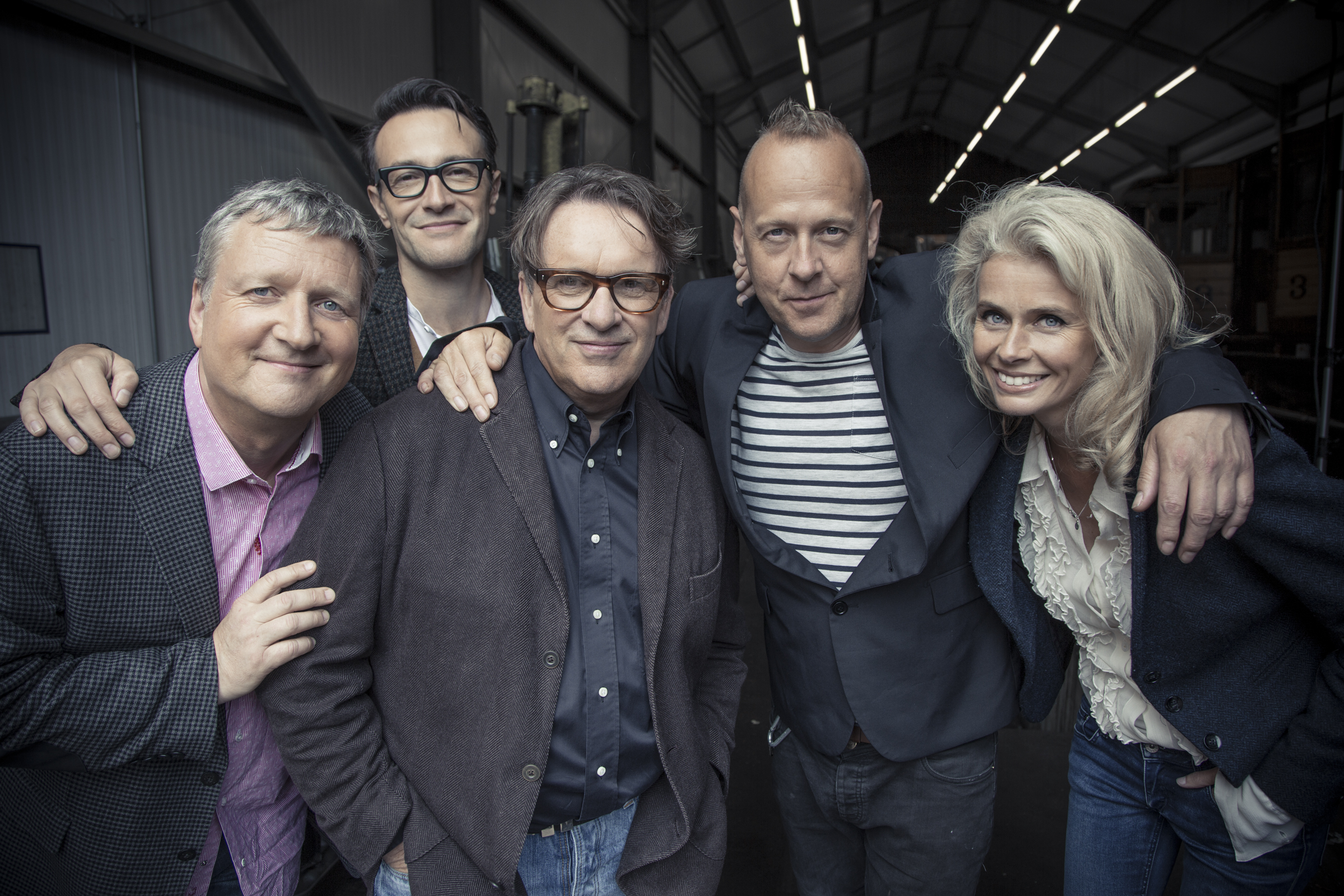 It seems a fantastically appropriate place to find songwriters Glenn Tilbrook and Chris Difford beavering away on a follow up to such perfect vignettes of working-class London life as Up The Junction, Cool For Cats and Pulling Muscles From A Shell. Especially when the doors open to reveal an Aladdin’s cave of rock memorabilia, vintage keyboards, toy Beatles guitars, Kinks posters and shelves of vinyl guarded over by shop-window dummies in gaudy costumes.

“Soon to be all gone,” says Tilbrook, looking out on the shabby estate. “It’s all been bought up. There’s high rises going up, but we’re staying put.”

The guitarist and singer has lived in this area all his life, forming Squeeze in 1974 after answering an ad from lyricist Difford in a sweet-shop window. “The life we experienced as kids seems a sort of dream world to me now. All that damage from the war, empty properties, bomb sites, the ghosts of it are all around. I like the memory of how it was then and I like the reality of how it is now.”

BBC2’s sitcom Cradle To The Grave, which stars Peter Kay, features several Squeeze songs
It is an apt description of the new Squeeze album, Cradle To The Grave, an upbeat, nostalgic collection about growing up in London in the Sixties and Seventies, full of pithy observations of school, football, family life and first love set to flowing melodies and arrangements evocative of the era. The title track can be heard chiming cheerfully over the credits of the hit BBC2 Peter Kay sitcom of the same name, inspired by broadcaster Danny Baker’s autobiography, Going to Sea in a Sieve. Squeeze songs feature throughout the series, with the band making a brief cameo in episode two.

“We trod very similar paths to Danny,” explains Difford, who attended the same school as Baker (a few years apart) while Tilbrook and Baker briefly dated the same girl. There had been talk about working together on a musical before the series came about. “His book gave us the impetus to write, after a very long break. It’s been amazing to go back to that world, like travelling in time. Danny was the eagle eye, on set all the time, saying things like, ‘School kids wouldn’t be wearing blazers that clean and tidy, so put ’em on the floor and everybody stand on them for five minutes and then put ’em back on.’ ”

A new Squeeze single, Happy Days, is on the A List at Radio 2, a fact which is making the 58-year-old Tilbrook almost giddy with excitement. “How mad is that? When I heard we’d gone on to the playlist, my hairs stood up on end. I never thought it would mean so much, but it does.”

Tilbrook admits to feeling he has been “out in the wilderness” for a very long time. “It’s alright,” he says. “I’ve been fine with it, you struggle on even though you know you’ve lost your way.” He recalls “the lowest” moment of his musical career. Squeeze had broken up, and he was touring the US solo in a second hand Recreational Vehicle only accompanied by his manager-wife Suzanne Hunt. “I sprained my ankle onstage, so I could hardly walk. Then the bus broke down in Seattle and I had to fly on by myself to this gig in Salt Lake City where 10 people turned up and the promoter f***ed off before the end. So I packed up and limped outside, kicking my guitar cases along, trying to find a cab. And it just struck me: a lifetime of music and this is where I’m at. ” Tilbrook guffaws. “I often think of that time, but it always makes me laugh.”

To put it into a context, Difford & Tilbrook have been compared to the very greatest British songwriters, held up alongside Lennon & McCartney, Elton John & Bernie Taupin, Ray Davies, and Elvis Costello. With the classic line-ups of Squeeze, which featured Jools Holland and later Paul Carrack on keyboards, they scored a series of scintillating hits between 1978 and 1982, pop music that was headily intelligent and melodically audacious. When Up The Junction reached number two in 1979, they “were selling 15,000 records a day,” points out Difford. “If I was selling 15,000 records a day now, I’d be Adele. There’s a fine thought.” Yet somehow Squeeze never quite reached the commercial heights those early hits promised, their career hampered by break ups and changing line ups until Difford called it a day in 1999.

“What happens is that you are young and enthusiastic and want to be in a band, and you all get in a boat and row in the same direction,” says Difford. “And then somebody loses the oar, and you go round in circles for a couple of years, everybody dives out, the boat capsizes, and when you eventually get it back in the water again, you kind of go ‘Who is that guy? I don’t know him.’ Cos you’ve grown up, you are very different people now.”

Squeeze re-formed as an occasional touring band in 2007, although the only original members are Difford and Tilbrook. Their unique blend of voices give Squeeze their distinctive flavour, Tilbrook high and sweet, Difford low and monotone, both singing an octave apart. They are very different characters, Tilbrook gregarious and cheerful, Difford reserved and unexpressive, though with wry humour behind his dry delivery. Although sober for years, during Squeeze he struggled with drugs and alcohol and still carries a hint of damage about him. The songwriting partners are very careful around each other, as if aware that what they have is valuable yet fragile. “With writing, I felt conscious that if we didn’t do something really great then there’s no point,” says Tilbrook. “Competing with your own past is hard enough anyway, because people have memories associated with those songs. It took us a long time to get back to where we were.”

Chris Difford and Glenn Tilbrook: their unique blend of voices give Squeeze their distinctive flavour
Tilbrook insists he has always felt grateful to be able to make music, whatever the circumstance. In the early days of Squeeze, he recalls jamming backstage with Keith Richards and then later watching “an old bloke called Ted” sing and play in his local pub. “And I got on really well with both of them, and I realised that we all just love music, and there’s a straight line between Keith and Ted, and I could go either way. And I thought ‘I’m good with that.’ It’s a fantastic life, it always has been.”

Difford doesn’t seem entirely convinced. “I’ve battled with aspects of the life. Touring was a huge struggle for quite a long time. But I’m sixty years old, I’ve come all this way, it’s not going to change now. I’m not suddenly going to become a plumber.” There is a long pause, while he seems to consider this. “Although a plumber would probably make more money.”

3 Responses to "Squeeze featured in The Telegraph"