I didn’t feel at all nervous
Though for me this was new
Presenting an hour long special
On Randy for Radio Two
Hey! We’re in the same business
And have some mutual acquaintances
I felt like I should know enough
To put him through his paces
It should be a wizard wheeze
For me to shoot the breeze with Randy Newman

“Lets get a few things straight”
Said Steve, the producer of the radio show
“Just relax and have a good time
But there are some key things we’ll want to know”
“That’s fine” I said “I’ve done my homework
I’ve bought the CDs and some notes
But I’d rather not read from written questions
So let’s just see how it goes
We’ve got an hour so let’s not worry
We’ll get some banter going and not hurry”

He looked a little bit nervous
I said that it would be great
We’re taping here in London
And Randy’s at home in L.A.
Cut to two hours later and it’s one minute to five
And I’m thinking to myself I’m glad this isn’t going out live
There’s a pounding in my heart as I start interviewing Randy Newman

“Hello there Randy, I’m Glenn Tilbrook
Are you there? Can you hear me?
Let me just say that I’ve been a big fan of yours since 1973”
And all the questions that I thought would flow
just sailed right out of my head
And in the hour that followed I huffed and bluffed my way
through a pool of sweat
I remember asking him if he was doing merchandise in ’74
And if so did he ever consider selling ‘Randy Newman’s Mighty Sword’
As a joke it wouldn’t have made the ‘C’ List
It’s a character of Randy’s pet name for his penis

Yes I was something less
than a resounding success with Randy Newman
Randy had been kind
but I floundered like I didn’t have a clue, man
‘Bad Love”s his new record if you haven’t got it yet
well you should do, man 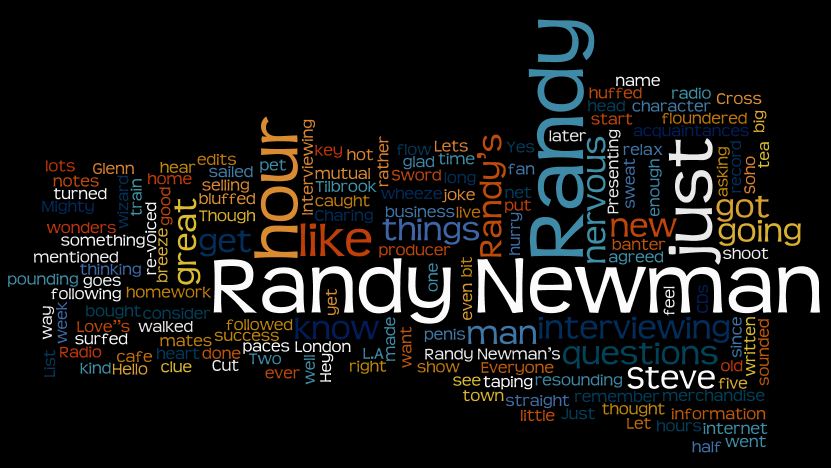