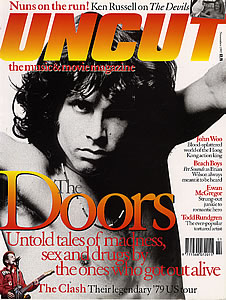 SUMMER HOLIDAY
Glenn: “I saw it when I was five and it made my mind up for me as to what I wanted to do. Seeing Cliff and The Shadows get out of a double-decker bus and start playing music on the beach with people dancing around them looked like the best fun ever.Squeeze used to cover a Cliff song, ‘On The Beach’, round about the time of Cool For Cats. We offered him one of our songs once, (‘Someone Else’s Bell’ from East Side Story), but he said he would never sing a song with such a negative lyric about infidelity.”

DAMON RUNYON
Chris: “I don’t read very much, although I like to be surrounded by books at home, it makes me feel good. I went through all the Raymond Chandler books as a teenager, and I especially liked Damon Runyon. I loved the lyrical use of prose, very clever. That storytelling style had a big influence on my own lyric writing. All that stuff about characters like Harry The Horse and the ginger-haired Greyhound Bus driver, just amazing. There’s another great story called ‘The Eating Contest’ which is just hilarious.”

MALCOLM HARDEE, VIC REEVES
Glenn: “Malcolm is a seminal south London figure. This area doesn’t have much of a music culture, but it has a very strong comedy culture, largely due to Malcolm and The Tunnel Club in Greenwich. It’s a shame he’s never broken through to the premier league of comedy, but maybe what he has is difficult to package for a mainstream audience, although you could have said the same thing about Vic when he started out. We had Vic as our MC when Squeeze played the Royal Albert Hall a few years ago, and he arranged a game of bingo during the encore, fixed so that absolutely everyone in the audience had a winning ticket – thousands of people shouting, ‘House!’, at the same time. That was a laugh.“

LEONARD COHEN – The Future
Chris: “This is a very powerful album, and one of the few I can confidently sing along to. He’s reflecting on the society he lives in and in a very clever and succinct way. He’s 60-something years old, and I tend to listen to people like that because they invariably know what they’re talking about. He’s passing on a message to younger people, and if you don’t listen to the wisdom of your elders, your own progress through life will be a lot slower.”

SLY & THE FAMILY STONE – Fresh
Glenn: “Sly was one of the big four soul figures of the seventies for me, along with Curtis Mayfield, Marvin Gaye and Stevie Wonder. This is one of the most indispensable albums in the world. The drummer who played on ‘Fresh’, Andy Newmark, was in Squeeze for a while. He told this great story about his audition. He went round to Sly’s house in LA, just 16 years old, fresh-faced, really keen. After waiting around for three hours, he starts wandering through the house and comes across Sly’s bedroom where the great man is in bed with two girls, a mound of cocaine on the bedside table. The girls scatter off, and Sly asks Andy, ‘Can you play?’ Andy says he can, and Sly says, ‘But can you play funky ?’ Of course, there was a drum kit set up in the bedroom so Andy started to play – in front of a naked, coked-up Sly Stone. He got the gig, though.”

CAROLE KING – Tapestry
Chris: “Every song on this album is a classic. It was very much of its time, the early Seventies, but its sentiments still ring true today. I was going out with a girl called Diane Twigg at the time and she loved the album, but she also loved horses. Our relationship came to a point where we split up because I delivered her an ultimatum, me or the horses. She went for the horses, and I was left with the ‘Tapestry’ album. I think I came out on top.”

GRANTA
Glenn: “This is my favourite publication, because of all the great writing its introduced me to – people like Redmond O’Hanlon, who wrote a book called ‘In Trouble Again’ , one of the best travel books ever written. It was about his expedition to the Congo and taking along a companion who was utterly unsuited to travel. It’s one of the funniest and most touching books ever. I also got in to Martin Amis through Granta.”

A CLOCKWORK ORANGE
Chris: “ I don’t go to the cinema very often, and I particularly find violent films very hard to take. Glenn bought me Reservoir Dogs a few months ago and I found the violence disgusting. So I watched A Clockwork Orange again to see if I still liked it. The film was very much part of my youth. I was a skinhead, I lived on a council estate, I had the same passion for music – it was reggae for me rather than classical – but the violence wasn’t anything like I’d remembered it. It was no worse than an episode of ‘The Bill’. As a piece of cinema, it’s just amazing, and I strongly identified with a lot of it, the drugs and everything. I wanted to drink the magic Milko like Alex – and I did, passionately.”

GENE KELLY
Glenn: “There was a Seventies film called, That’s Entertainment, a compilation of clips from MGM musicals, which was just staggering, Gene Kelly was a big hero when I was about 15 or 16, not that I ever aspired to be him. His dancing was fabulous, like that great sequence in Singin’ In The Rain, and he also had such an immense amount of charm. His autobiography is one of the best books I’ve ever read.”

MOTOWN CHARTBUSTERS
Chris: ‘These compilations were literally worn out from being played so much. For anyone of my age, Motown was an introduction to black music – there were just so many great singles from that era. I also had a huge collection of reggae and ska, but they all went out of the window when I went from a skinhead to a hippy, almost overnight. Happened around the time I met Glenn, actually. He had his hair right down his back, no socks and horrible satin flares. We sort of meshed in to one person for a while.”

SHORT-WAVE RADIO
Glenn: “ My obsession with newspapers is long-standing, I don’t feel my day is complete until I’ve got the news from ‘The Guardian’ or ‘The Independent’, but at the risk of sounding Colonel Blimpish I always take a short wave-radio on tour with me for the World Service, rather than buy foreign newspapers. When I was growing up, I used to love tuning in to stations all over the world and writing them all down in a notebook. Just the concept of sitting in my house and listening to Moscow, even though it was deadly dull and boring.”

Chris: “I can’t get enough of it, I love it. That kind of sound has been destroyed by FM radio, demolished by compression. I still get very nostalgic when I hear radio on that sort of signal, listening to the charts from Africa or somewhere. Listening to Massive Attack with no bass end, you can’t beat it. I remember wiring up the Squeeze tour bus and having a little radio in my bunk so I could listen to the World Cup. Being in a group is like being a sub-mariner – once you’re on the bus you could be anywhere. Listening to the football or the shipping forecast on short-wave is the only way to stay sane.”