GLENN TILBROOK & THE FLUFFERS
New download only single
Melancholy Emotion (11th May)
“’Pandemonium Ensues’ is the best album he has made for a long time, tuneful, sharp, succinct and all great. (Word)
“Reassuringly familiar hook-happy pop.” (Uncut)
“Sharp, vernacular little glimpses into ordinary lives and the opportunity for a bit of a knees-up.” (Q Magazine)
“Tilbrook’s adaptable song-writing talent is in good health. Squeeze fans The Feeling would kill for the cleverly modulating ‘Melancholy Emotion’.” (Mojo)
“His melodic skills are undiminished and that golden larynx can make anything sound appealing.” (Daily Telegraph)
“It bears all the classic Tilbrook hallmarks – sharp songs well sung. A worthwhile addition to the cannon of one of pop’s great communicators.” (The Sun)
Glenn Tilbrook and his band The Fluffers release a new single Melancholy Emotion on digital download only on Monday 11th May. The single is taken from their new highly acclaimed album, Pandemonium Ensues, which was released through Quixotic Records on 2nd March. The album, produced by Glenn Tilbrook and Andrew J. Jones (Lord Large) and mixed by Bob Clearmountain, features guest appearances from Johnny Depp on Too Close To The Sun and his wife, Vanessa Paradis, on Interest & Love.
Pandemonium Ensues is Tilbrook’s first album in five years and his first full album with The Fluffers. The album follows The Incomplete Glenn Tilbrook (2001) and Transatlantic Ping Pong (2004). His last release was a feature length documentary Glenn Tilbrook: One For The Road (2006) about life as a touring musician on the road in the US.
Tilbrook has recently completed shows in Japan and Australia and is currently on tour in America with The Fluffers. On his return he heads out on a fourteen date solo acoustic tour of the UK in May.
Tilbrook first came to fame as founding member and one-half of the songwriting team behind Squeeze who wrote some of the most-loved songs of the last thirty years. They notched up Top Ten hits around the world with – “Cool For Cats,” “Up The Junction,” “Slap & Tickle,” “Pulling Mussels (From A Shell),” “Another Nail In My Heart,” “Tempted,” “Labelled With Love” and “Black Coffee In Bed.” Today’s newer artists, such as The Feeling, Kasabian, The View, Razorlight, Mark Ronson and Lily Allen have all sited Squeeze as a major influence.
In respect for their songwriting Glenn Tilbrook and Chris Difford have been honoured with two prestigious awards – the Ivor Novello Award for their “Outstanding Contribution to British Music” (presented by Mark Ronson) and the “Icon Award” (presented by Lily Allen) at the O2 Silver Clef Awards.
In 2007 the newly reformed Squeeze played sold-out shows in America and the UK. In 2008 they played at Womad, Beautiful Days and V Festivals in the UK and a nineteen-date American tour in September.
Tilbrook is also involved with the Love Hope Strength Foundation. In 2007 he trekked to the Base Camp on Mount Everest to raise money for a Cancer Hospital in Nepal. It also went in the Guinness Book of Records for the highest ever recorded gig on land. This year he will travel to Kilamanjaro on the 27th September – 9th October, for more information go to:
http://www.lovehopestrength.org/events/kilimanjarorocks/index.php
The Fluffers comprise of Simon Hanson (drums), Lucy Shaw (bass & double bass) and Stephen Large (keyboards).
24.03.09
www.glenntilbrook.com
www.quixoticrecords.com 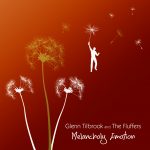