John Bentley has been very busy in the past year and has released not one but two full-length CDs and appeared as a musician on others. His first released under his own name was ‘The Man Who Never Was’, an instrumental album of spy-thriller ’60’s influenced cool. 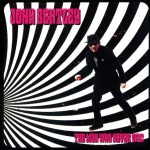 I’m obviously biased because I designed the CD booklet for him. Here are some snippets of the album:

In addition there are some amazing videos made by David Milner on YouTube – check them out:
[tubepress mode=”playlist” playlistValue=”D0ACEF20C119B3FF”]

Anyone heard the album and want to review it?