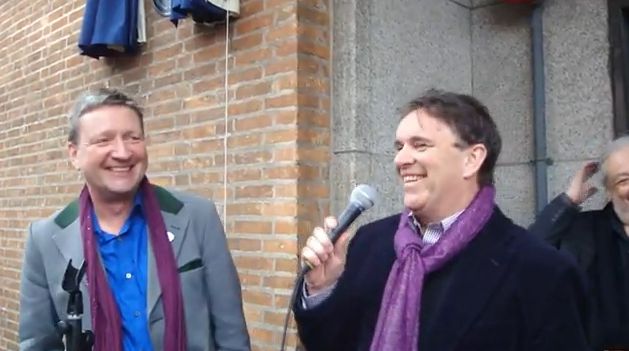 As Quixotic Records mentioned, Squeeze were honored today with a heritage plaque commemorating the first venue they ever played, back in 1975. I thought the speech by the chairman of PRS for Music was really quite touching! I guess I should have expected a lot of Squeeze love, considering this is only the fourth plaque they have done. Snipturn put up a video of the ceremony on YouTube, so we can all see!

Later in the day, Squeezeliveblog put up a great video of Chris, Glenn, and Stephen Large doing Up the Junction (with Glenn ending up lying on the piano no less!) from the concert that followed the award ceremony.

And snipturn, who never lets us down, followed it up with a fantastic video of Goodbye Girl, featuring an amazing solo by Stephen, and a rousing version of Take Me, which includes improvised percussion from the whole band, and eventually the whole audience! These are both very lively, fun videos, so don’t miss them!

It is great to see Glenn and Chris (and the rest of the band, of course!) receive this well-deserved award, and then clearly enjoying themselves playing afterwards. I know that many of us feel like they don’t get anywhere near the recognition they deserve for their amazing talent and the influence they’ve had on the bands that have followed them. Congratulations, guys!