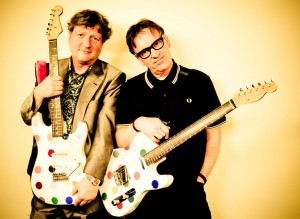 An exclusive set of instruments customised by Damien Hirst and created especially for British band Squeeze, will take centre stage when the band perform at Concerts for Teenage Cancer Trust at the Royal Albert Hall on 22 March 2011. Squeeze will be joined by a 30 piece orchestra and long-time friends and collaborators The Feeling, on the second night of Teenage Cancer Trust’s 2011 series of fundraising concerts at the iconic venue.

The Damien Hirst collection features two ‘Spot Guitars’, a Fender Telecaster and a Fender Stratocaster, as well as a Yamaha ‘Spot Drum Kit’. All the instruments are hand painted by Hirst with his iconic spot design and signed by the artist himself.
Following the concert, the instruments will be auctioned at Christie’s and will be the first guitar and drum kit to be sold in Christie’s April auction of Post-War and Contemporary Art. This special sale will raise money for two music focused cancer charities, Love Hope Strength Foundation and Teenage Cancer Trust and is expected to raise in the region of £60,000, with proceeds split between the two charities. The Drum kit and Fender Telecaster will be auctioned on Wednesday 20 April, whilst the Fender Stratocaster will be auctioned in September.

Simon Davies, CEO of Teenage Cancer Trust said: “We’ve been staging our concerts at the Royal Albert Hall for over ten years and had some huge stars perform for us, but we’ve never combined such exceptional art and music in such a creative way before. We can’t wait to see Squeeze play the instruments and hope they raise lots of money to help more young people in the UK fight cancer.”

Mike Peters, two times cancer survivor and founder of Love Hope Strength said: “I am so honoured to be able to work shoulder to shoulder with Teenage Cancer Trust in the fight against cancer. This generous action from Damien Hirst and Squeeze will help us recruit Bone Marrow Donors at rock concerts throughout the UK and raise awareness of our campaign to increase the age of UK Bone Marrow Donors in line with countries like Canada, USA and Germany. LHSF is fortunate to have the dedicated support of Squeeze singer Glenn Tilbrook, and together we have lead teams of musicians, trekkers and cancer survivors to some of the highest places on earth, raising funds and proving you can survive cancer and go on to achieve remarkable things.”

The unique instruments will be on public exhibition at Christie’s South Kensington saleroom prior to the sale, from 16-19 April 2011. The Fender Stratocaster will go on view ahead of being offered in the September sale, from 10-14 September 2011. The instruments will be on display alongside 200 further artworks by well-known as well as emerging post-war and contemporary artists such as Andy Warhol and Tracey Emin. All will be offered in the same auction at 1pm, on 20 April 2011. Christie’s auction catalogue will be available approximately three weeks before each sale, both in hard copy and as an e-catlogue online www.christies.com/calendar There are five different ways to bid at Christie’s auctions – bidding in person, bidding remotely using Christie’s Live™ online bidding service, leaving a written bid with the auctioneer or online and bidding via the telephone.

Every day in the UK, six young people are told they have cancer. This is a rising figure and there are more teenagers than children with the disease. Teenage Cancer Trust is dedicated to helping young people fight cancer. They fund and build specialist units in NHS hospitals designed to give teenagers the very best chance of a positive outcome. As well as state-of-the-art facilities to keep young patients occupied during long stays in hospital, the units provide a place where young people can meet others in a similar situation. For the last ten years, longstanding patron, The Who’s Roger Daltrey CBE, has worked tirelessly to secure stellar line-ups for their flagship event, Teenage Cancer Trust concerts at the Royal Albert Hall, held in March each year. Acts to have performed in the past include The Who, Coldplay, Muse, Eric Clapton, The Cure, Paul Weller, Stereophonics, Keane, Razorlight, Jools Holland, Noel Gallagher, Kasabian and Kaiser Chiefs.

Armed with the universal language of music, Love Hope Strength Foundation has engaged in the fight against cancer by hosting musical pilgrimages to remote venues like Everest base camp, The Empire State Building, Machu Picchu, Mt. Kilimanjaro and Mt Fuji, and has the support of all kinds of musicians from high school bands and Nepalese folk singers, to legends of rock n’ roll including Squeeze, The Cult, Stray Cats, The Alarm, Gin Blossoms, The Fixx, Nick Harper, The Levellers, Ocean Colour Scene and many more who help spread the message of love, hope and strength through music.