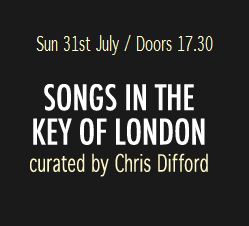 Greenwich Summer Sessions concludes with a unique finale concert, in which Chris Difford of Squeeze curates a special event entitled Songs In the Key of London; he describes it as “a live celebration of all the great songs inspired by and written about this wonderful city of ours.” This concert will feature the cream of musical talent, songwriters, tunesmiths and stars – personally invited by Difford – coming together to celebrate London in song.

So far we are delighted to confirm Gary Kemp (Spandau Ballet), Ali Campbell (UB40), Mark Nevin (Fairground Attraction), Boo Hewerdine (The Bible), the Godfather of Funk Pee Wee Ellis (James Brown), and folk artists Chris Wood and Katherine Williams who will all be part of the evening’s programme.

The artists are spoilt for choice with just how many historic songs that have been written about London. From classic pop like Waterloo Sunset by The Kinks and Itchycoo Park by the Small Faces, to folk cornerstones like Streets Of London by Ralph McTell and London Conversation by John Martyn, to punk classics such as London Calling by The Clash, and Difford’s own Trafalgar Square – the programme is impressive and infinitely varied.

There will also be a superb house band supporting the special guest artists, making this an unmissable event. A fitting finale and fantastic start to the year-long countdown to the 2012 London Olympics.

Look out for announcements with further additions to the line up…

There will be a further special guest of Chris’s on the evening :)