Touching Me Touching You by Sweet Diss and the Comebacks is available from Burning Sky Records on the newly released Songs of Squeeze Revisited.

Here’s the story of their recording:

US band Sweet Diss and the Comebacks is one of Burning Sky Records best discoveries – and it happened by accident! I was trying to find a band with a similar name on MySpace, and stumbled across Sweet Diss and the Comebacks. Man, am I glad I did. Sweet Diss combines powerpop influences with punk rock flourishes, and all with a sense of humor. I love this band! (Singer and main man Nate Reinauer sounds like a young Roger Manning – and that is very cool, indeed.)

TOUCHING ME, TOUCHING YOU – SWEET DISS AND THE COMEBACKS
Why be part of a tribute to Squeeze?
Even their “joke” songs were better than the serious efforts put out by other groups at the time. What more is there to say?

Why the song “Touching Me, Touching You”?
From the moment I first heard the song, I knew it’d be a great one to toss off…

What approach did you take to the song?
I tried to strip it down to just the chords and melody, and then build it back up in the style my band normally plays. The protagonist is clearly passionate about the subject, so hopefully that shines through on this version as well! 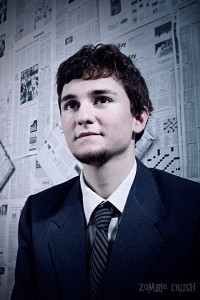 Don’t forget to enter our competition to win a free copy of the 4CD 50 track set!