I’ve just had an email (through the Contact page – you know where to find me!) from Rob who asks me:

Hello David
While watching an old VH1 programme about trying to get the 1985 Squeeze band members to reform. I’m sure Mr Difford said that Squeeze were the first band to do unplugged. I thought I should consult the oracle that is David Bailey to:
A: Confirm one way or the other, this fact.
B: Let me know if there is a recording, either just audio or DVD/Video of the occasion.
I hope you can help.
Take care
Rob

Thanks for the question Rob. The answer is that Difford and Tilbrook appeared on MTV Unplugged before it was called MTV Unplugged. The show went out on 26 November 1989 and they played [[Pulling Mussels (From the Shell)]] and She Doesn’t Have To Shave from their newly released Frank LP.

The season premiere of “MTV Unplugged” features performances by British rockers Squeeze, solo artist Syd Straw, and Elliot Easton from The Cars. Musical highlights include Glenn Tilbrook and Chris Difford of Squeeze performing a rendition of their classic hit “Pulling Mussels From The Shell,” as well as a song from their new album Frank, “She Doesn’t Have To Shave.” The show is hosted by singer/songwriter Jules Shear. (The first episode of the season is an encore presentation of the pilot which aired November 26, 1989.) They performed at the National Video Center in NYC. Set List: 01. Pulling Mussels from a Shell 02. She Doesn’t Have to Shave 03. If We Never Meet Again 04. Messed Around 05. Almost 06. Magic 07. I’m a Believer [all except Bonebrake]

It did appear on VHS and DVD at one stage as Unplugged Superstars (but the tracklisting only included [[Pulling Mussels (From the Shell)]]: 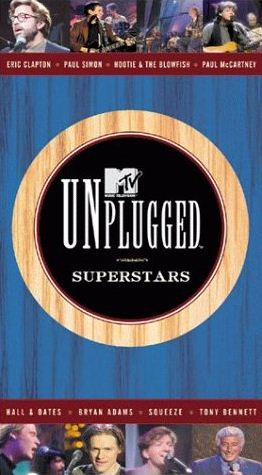 I’ve got it on VHS somewhere in the archive. Can anyone help digitise a copy and upload it to YouTube – or maybe it’s on there already!

4 Responses to "Squeeze on MTV Unplugged"