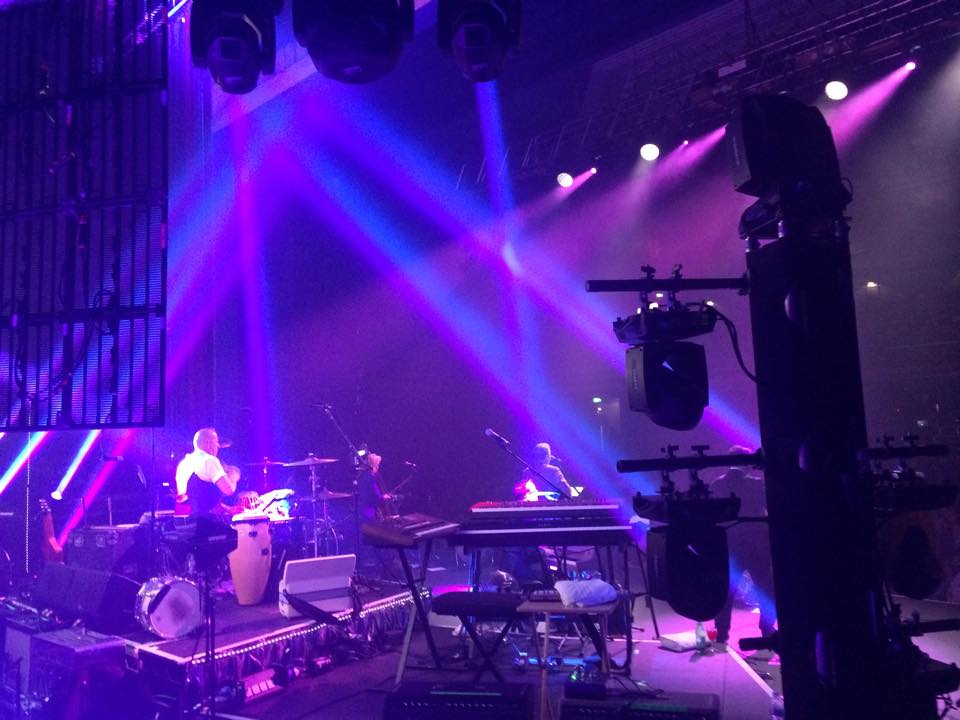 “Chris Difford and Glenn Tilbrook have been writing and performing together for over 40 years, albeit with the odd split thrown in for good measure. In November last year, they toured for the first time in 20 years, and they put on a pretty unique show at the Tyne Theatre. The curtain went up to reveal a 1970’s bedroom, with the two of them doing a Morecambe and Wise, except they didn’t stay in bed together to crack jokes, but slowly got up, made the bed, then started singing in their PJ’s – all rather surreal. There followed plenty of chat and a Q & A with the audience, sprinkled amongst their numerous hits, many of which you’d be forgiven for forgetting they’d had.

Spring forward almost a year, and the show at Sage Gateshead was a very different affair – this was the two of them again, but this time with the four other excellent musicians who now make up Squeeze, and a proper concert ensued, without the 1970’s props.

They kicked off with one of their classic old hits – ‘Hourglass’ – and for the first minute or so I thought Glenn’s voice sounded decidedly dodgy. Thankfully, it was just a case of warming up the vocal chords, and he was back on form by the end of the song, and they followed it with two more of the old numbers everyone had come to hear – ‘Is That Love?’ and ‘Another Nail In My Heart’.

Videos played behind the band with every song – some were really good, such as pictures of Chris and Glenn at school 49 years ago, together with drawings and doodles they had penned, during ’Labelled With Love’.

The one I enjoyed most though coincided with one of my favourite Squeeze songs, ‘Coffee In Bed’. It was a simple, sensuous, beautiful film of a woman’s left eye, from very close up, so literally all you could see was the left side of the top of her nose, her rich brown eye and the lashes, slowly and occasionally blinking, in between sadly staring straight ahead.

The band was very tight, and very versatile – there were an incredible number of different instruments played throughout the set, including pedal steel, accordion, mandolin and double bass, often with band members switching within songs. Stephen Large was excellent on various things, but notably so on a melodica – no, I didn’t know what it was either until I researched it after the show….it has a keyboard on top, and is played by blowing air through a mouthpiece that fits into a hole in the side of the instrument. It made a lovely different sort of sound which is hard to describe.

A number of tracks were played from the band’s first album of new music for 17 years – ‘From The Cradle To The Grave’- which were written as the soundtrack to the BBC drama based on Danny Baker’s life story. For me, the quality of the show dipped every time one of them was played. The title track is typical of the jaunty singalong nature that many of them have, and which I feel are very dated and don’t like at all, I’m afraid.

Although the middle of the set dipped as the new numbers came at us, it was quickly back on an upward trajectory as more of the great songs from the past replaced them. The audience was invited to the front by Glenn for little ‘Slap and Tickle’, with all of the band performing in a line at the front of the stage, playing a double bass, an accordion, bongos two guitars and mandolin…..great stuff!

‘Up The Junction’ closed the set to rapturous applause, and the ensuing obligatory clapping and stomping of feet resulted in four more songs, ending inevitably with ‘Cool For Cats’, you might surmise, like me and most other people in the audience……

….but no! it proved to be the penultimate one, and the last hurrah was a bit of a surprise, and as a piece of theatre worked really well. The band all mock-marched around the front of the stage, playing ‘Take Me I’m Yours’, and then facilitated the ‘taking’ by playing ‘follow my leader’, as Glenn wandered off stage left, and into the audience, finally coming to a halt in front of the balcony as the song finished.

Hall One at the Sage has magnificent acoustics, and was perfect to enable everyone to hear every word of the great stories told within the songs of Squeeze. So, all-in-all, a very enjoyable show which improved as it progressed, but it’s shame that the new material doesn’t quite match up to quality expected from two proven masters of songwriting like Chris Difford and Glenn Tilbrook”