Look at these babies! This CD isn’t out for another fortnight but I’ve managed to get my hands on two promotional copies of the brilliant new (from 1972!) Demos CD from Chris Difford – and one of them could be yours! 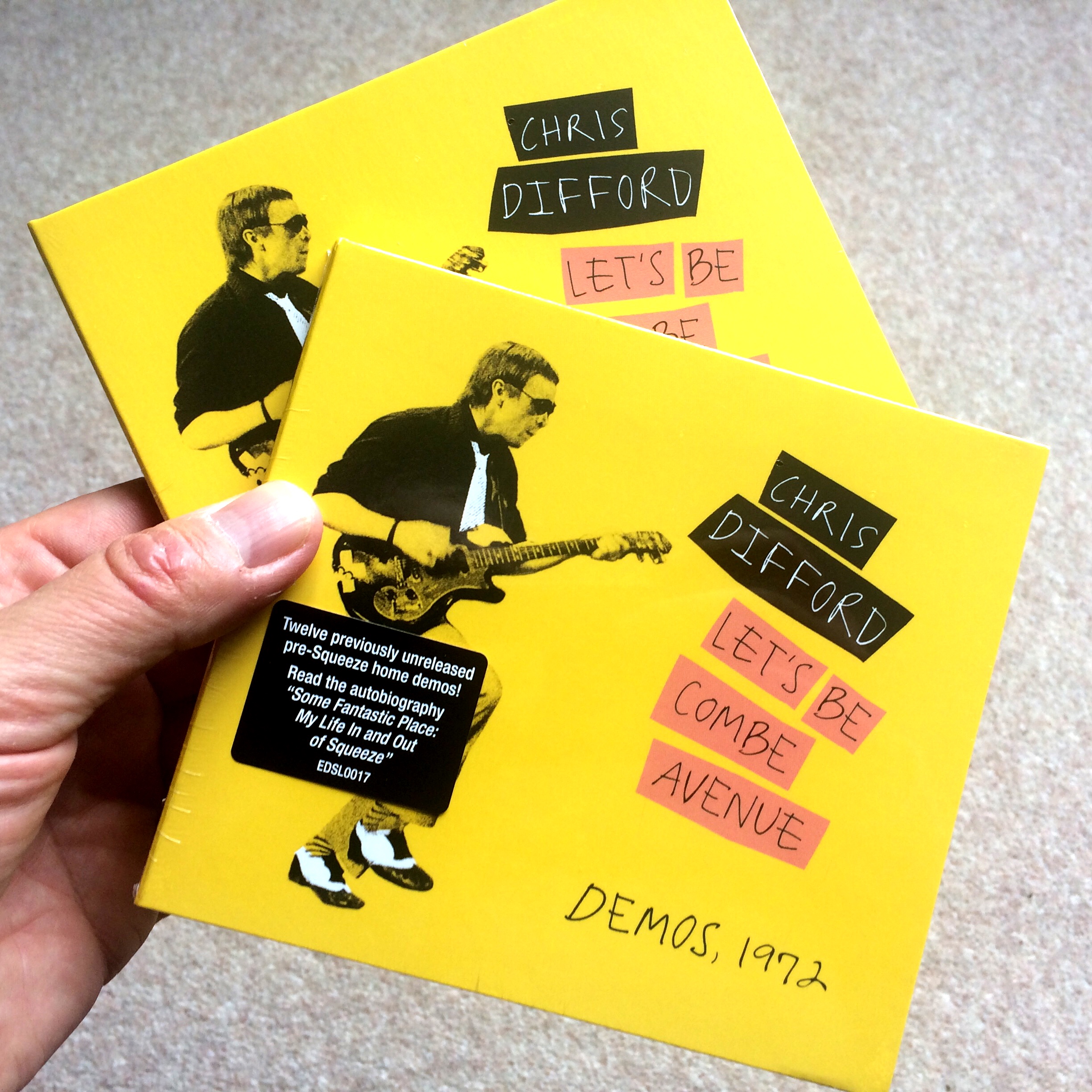 All you have to do to win one is write your favourite Chris Difford line from a lyric in the comments below and two winners will be chosen at random on Sunday night and your CD posted on Monday morning. Get posting!

You can pre-order the CD from Amazon now:

“An incredible archive release, issued alongside the long-awaited autobiography by Squeeze co-founder and lyricist Chris Difford. “SOME FANTASTIC PLACE: My Life In and Out of Squeeze” will be published by W&N on 31st August. To coincide with the publication, Chris has delved into the furthest recesses of his lock-up and retrieved these twelve demos on some dusty tape reels. These previously unheard gems were recorded on a reel-to-reel tape recorder (not a hissy cassette recorder!) in 1972 in the Difford family home in Combe Avenue in Greenwich, southeast London. They were recorded by good friend Bob Blatchford, who lived next door but one. They reveal the beginnings of Chris’s lyrical dexterity, combined with his own melodies. The formation of Squeeze was well over a year away…”

You can also pre-order Chris’s autobiography now from Amazon:

“Chris Difford is a rare breed. As a member of one of London’s best-loved bands, the Squeeze co-founder has made a lasting contribution to English music with hits such as ‘Cool For Cats’, ‘Up The Junction’, ‘Labelled With Love’, ‘Hourglass’ and ‘Tempted’. Even before his first release in 1977, his love of writing lyrics has never wavered.

Over the course of a thirteen-album career with Squeeze, it was clear from the very beginning that Difford has few peers when it comes to smart, pithy lyricism. His ‘kitchen-sink drama’ style has drawn plaudits from fans on both sides of the Atlantic, and his influence is keenly felt today. The likes of Lily Allen. Mark Ronson, Kasabian, Razorlight and many more have recognized the debt they owe to Squeeze’s music and to Difford’s way with words, while journalists were moved by his winning combination with Glenn Tilbrook to dub the pair ‘The New Lennon and McCartney’.

In Some Fantastic Place, Chris Difford charts his life from his early days as a dreaming boy in south London with a talent for poetry to becoming a member of one of Britain’s greatest bands and beyond. Along the way he reveals the inspiration and stories behind Squeeze’s best-known songs, and his greatest highs and lows from over four decades of making music.”

Let everyone see what your favourite line is below.

All the usual small print about competitions – no cash alternative, one entry per person, my decision final etc etc…

“Chris Difford’s place in the pantheon of great English songwriters is assured – surely nearly everyone can sing along to at least one Squeeze song. So in the wake of the success of the first new Squeeze album in 17 years, 2015’s Cradle To The Grave (which received across the board rave reviews), now is the time to re-visit Difford’s three solo albums: I DIDN’T GET WHERE I AM TODAY (2002), THE LAST TEMPTATION OF CHRIS (2008) and CASHMERE IF YOU CAN (2011), gathered together in one clamshell box, with 21 bonus tracks including previously unreleased song demos. The bonus DVD features Chris discussing the origin of a selection of the songs, as well as four new acoustic performances, filmed at Elton John’s studio. The 48 page perfect-bound booklet also features brand new notes by Chris about the writing and recording of each album, as well as track-by-track sleevenotes, and all the album lyrics.”