Out on 17 May 2011 is the long awaited DVD of Glenn Tilbrook and the Fluffers filmed at the Canal Rooms on 8 September 2006. 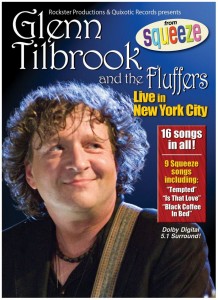 For the first time on video, Glenn Tilbrook, co-writer, lead singer and guitar virtuoso of the legendary pop group Squeeze, performs live in New York City with his group the Fluffers. This exciting concert was filmed at an intimate downtown club before a packed crowd of adoring fans. Glenn takes the audience on a musical journey through the history of Squeeze and beyond. In between numbers, Glenn chats about the songs with his good humored storytelling. Nine Squeeze songs and seven songs from Glenn’s solo albums are presented here. Also included is a behind the scenes documentary with Glenn and his band.