Here’s the pre-sale link for Difford & Tilbrook’s first major tour together as a duo for many years. Get your tickets from www.gigsandtours.com. Pre-sale begins Wednesday, 09 Apr 2014 at 10:00AM. Which gigs do you fancy? 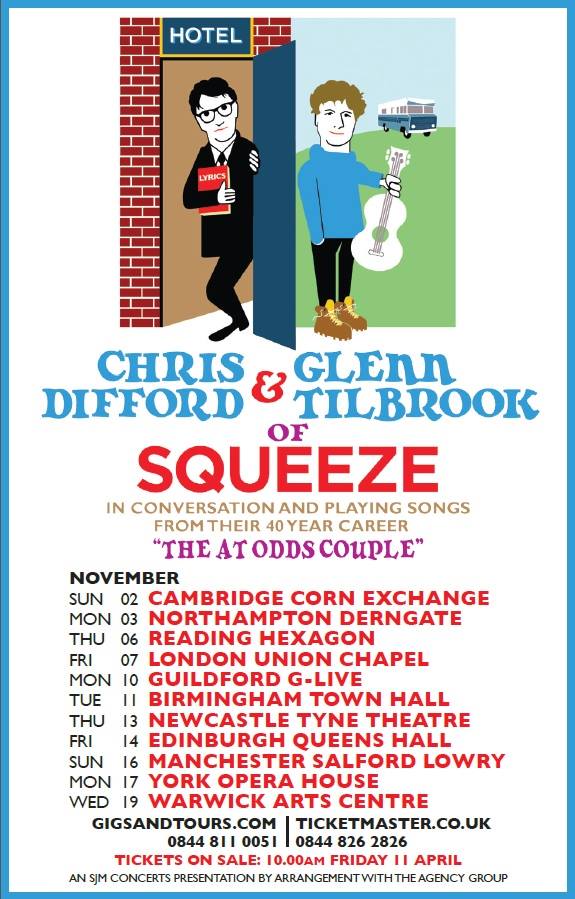 ‘There is lots of history and myth to our relationship. There have been times when we’ve not gotten on and not communicated with each other but we are now at a place where we have a lot of respect for each other’, explains Chris. ‘No relationship is plain sailing, whether it be personal or work, but over the years we’ve come to understand our differences and similarities and learnt to co-exist alongside each other.’

‘The last few years have been really interesting. We’ve talked more than ever and reflected on our relationship and it’s brought us to this point’, added Glenn.

In addition to performing a selection of hits, including ‘Up The Junction’ and ‘Cool For Cats’, Chris and Glenn will be dusting down some previously unrecorded songs that were written together back in the band’s infancy that were never recorded, ‘there are a few corkers in there’, as well as playing tracks from their solo careers. The duo’s also been working on new Squeeze material ‘ set for release in 2015 – which will no doubt creep into the set list