I don’t have many claims to fame, although I did meet Peters and Lee just after they won Opportunity Knocks. I was on holiday in Blackpool with my parents and brother. I remember looking up at the pair of them and wondering what it must be like to win a talent competition and suddenly achieve stardom.
I also recollect a time in the late nineties screaming loudly at my friend “Look it’s Budgie”, pointing to Adam Faith as he entered the Italian restaurant where we were eating. I did have a huge crush on the actor, and his clogs during the early 70s series and for a brief moment got caught up in past hysteria. Thankfully, he did see the funny side and I still have the autograph today that he scribbled on a napkin for me.
The first time I met Squeeze – Chris, Glenn, Jools, Gilson and Harri – was on October 10th 1978. They had been supporting Dr Feelgood at the Sheffied City Hall and as these young Deptford musicians were the only reason I had purchased a ticket for the concert, I never returned to the auditorium after the interval. 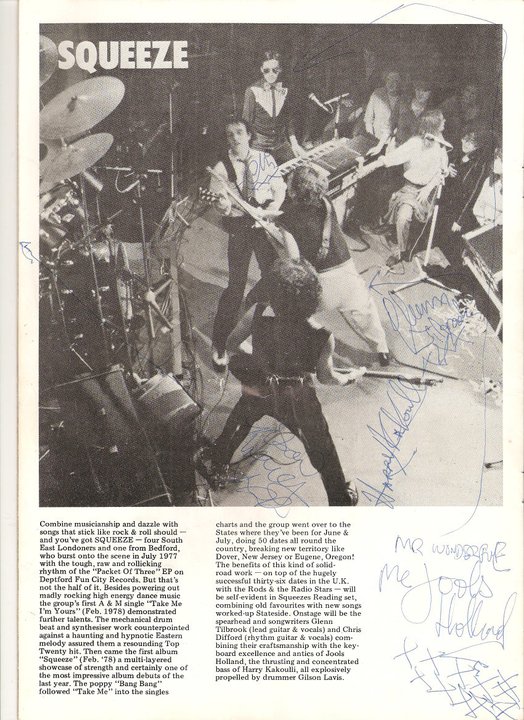 As the sounds of Dr Feelgood began to fill the City Hall, I remember walking down the staircase into a virtually empty bar, with ‘Squeeze’ written in big black bold letters across my chest. I had bought the printed t-shirt a few weeks earlier from one of the many merchandise vendors advertising in the back of the NME weekly music paper. It amuses me now to look back and picture the looks on the band’s faces. Whatever their thoughts, they were all extremely polite and seemed just as excited as I was to have photographs taken and sign their autographs. 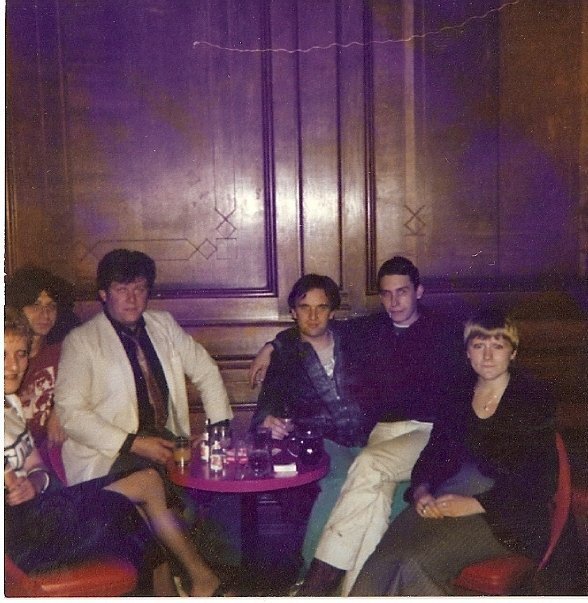 A surreal moment for me though, was on one of my many trips down to the capital. I loved the Kings Road and would spend the whole day walking the length and breadth of it. The ‘Our Price’ record shop was another firm favourite and when I walked in this particular day I was mesmerised. Hung on the wall behind their counter was the most enormous promotional poster of the band I loved – Squeeze. More importantly, the jumper Glenn Tilbrook was wearing in the picture not only matched my jumper perfectly, (albeit different contrasting colours) but had been knitted by my own hands. As a fan I could not have been more thrilled and wanted desperately to share my excitement with all the customers in the store. Thankfully, unlike years later, and my Budgie moment in the Italian restaurant, I just smiled with pride. 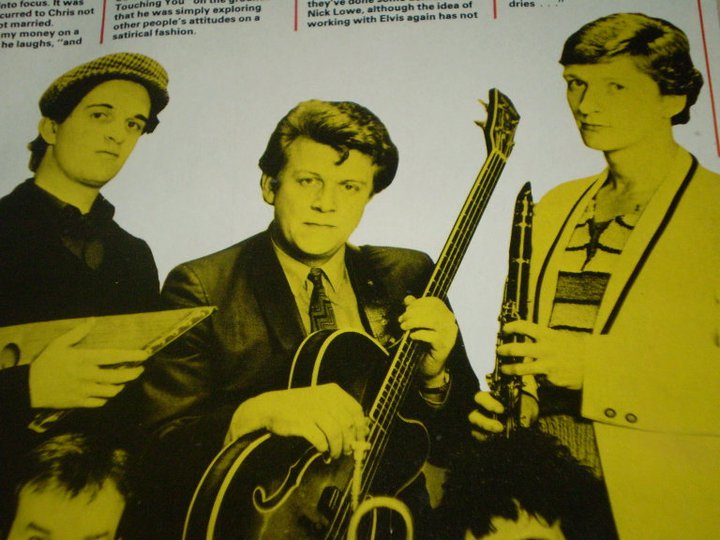 More than thirty years later and although folded neatly and tucked away in the bottom of a drawer, I still have the matching knitted jumper and my first Squeeze t-shirt.

4 Responses to "Knit One, Pearl One"