Chris Difford’s son Riley is a real character and his latest band Hatcham Social have a new album ‘About Girls’ coming out this March. They sound great and have some brilliant ideas for promoting their band. Using Pledge Music you can buy a stripped down house party gig from them, remix a song of theirs for a b-side or get them to record a favourite cover version of yours. They’ve also just recorded a great version of If I Didn’t Love You which all Squeeze fans really must take a listen to.

Our cover version of Squeeze ‘If I Didn’t Love You’
Afternoon, Here is a version of the Squeeze song If ‘I Did’t Love You’ of off the Argybargy album. Great band and great song, very pop but very strange as well. Anyway our version is a bit diff…

Listen to a sample of If I Didn’t Love You by Hatcham Social. 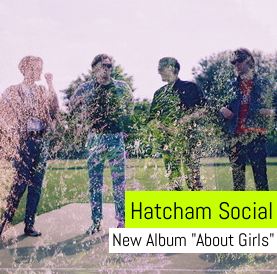 Here’s Toby from Hatcham Social to tell you all about it:

Toby from Hatcham Social here,
We are making a new album and we think its a wonderful piece of work, if we do say so ourselves! We are working with Pledge Music to allow you to get involved early and give those of you that pledge your support the opportunity to get the album before anyone in the general public. This also helps us speed up the process of getting the funding together for the release to get the album out of our rehearsal space. So win win for everyone (who likes our music anyway…).
When you pledge you get access to the updates we upload every week, quite a few already up for you as soon as you pledge. We have been recording cover versions of tracks by Hefner, Crystal Stilts, Squeeze, Charlatans, Maccabees and a few more. We also are giving all pledgers demo versions of the some of the tracks on the album.
We have put together a bunch of extra pledging options that come with the pre-order of the new album. See what you think and get involved if you see something you would like.
We believe this is the best selection of songs we have done so far and we can’t wait to share with you and get your responses. The album is set to be released in March so get your skates on if you want the extra pledger only bits and bobs.
Here is a taste of what the album will sound like, the first single that was released in December for download :

Big love Socialites, from myself (Toby), Finnigan, Riley and David